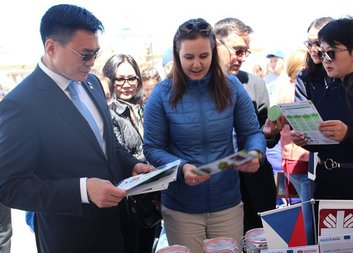 On the occasion of the 30th Anniversary of the establishment of diplomatic relations between Mongolia and European Union, the Delegation of the European Union to Mongolia hosted the EU day Mongolia on May 26 at the Sukhbaatar square. The event provided the public with an opportunity to get to know the EU member states through their tradition and culture, receive detailed information and advice on studying and travelling in the countries and getting Schengen visa, visit a trade fair of EU countries' entities, as well as to enjoy the countries’ cuisine and art performances. Moreover, during the event, information was given on over 20 EU-funded projects being implemented in Mongolia.

Caritas Czech Republic (CCR) in Mongolia took part in the event. Project team of the Waste Management project showcased the outputs of the project and the samples of Construction Demolition Waste (CDW) based product. By that, CDW based product with it’s samples and processing steps were presented, alongside the member recycling companies from MNRA. The project was documented on the photos and videos which was showcased on the LED screen. Study books, fact sheets and brochures were disseminated to the public to increase their knowledge on CDW management. Short video on the project was broadcasted on a big screen showing the main achievement of the project so far. As well as CCR has increased public awareness about 3R (reduce, reuse and recycle) concept under the cooperation with Recycling manufactures in Mongolia.

EU is Mongolia’s third neighbor, according to the Concept of Mongolia’s foreign policy. Thus, Mongolia has been working on intensifying its relations with EU and its member states in all possible areas. For instance, a meeting of the Ambassadors of EU member states has been taking place regularly in Ulaanbaatar since 2009. Establishment of the Office of the Delegation of the European Union to Mongolia in 2017 opened up an opportunity to elevate bilateral relations and cooperate more efficiently in many more areas.