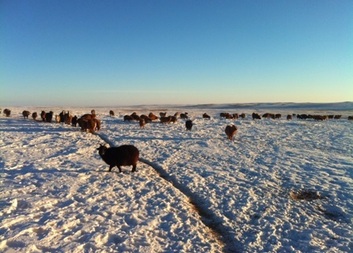 In accordance with the dzud assessment made by Mongolian Red Cross Society and National Emergency Management Agency, taking the number of family members into account during the project implementation, CCR provided 1.5 months food aid for households that have less livestock and vulnerable family members.

CCR staff had a talk with herders about seasonal blizzards while working in Khentii and Dornogobi provinces. They have mentioned that it is the coldest and heaviest winter Mongolians have seen since 2000. Early snowfall in autumn, resulting in snow melt during the day and freezing at night followed by a very heavy winter snow caused the harsh winter for herders. Mongolia’s herders say that normal temperatures of -39° C to-40° C affected insufficiency of hay and small and weak newborn livestock.

For every herder family the total loss of livestock is different. For instance, herder D.Enebish from Galshar soum of Khentii province, most badly dzud affected soum, lost total 120 head of livestock (approximately value of 12 million MNT) during this time. Loss of livestock during the dzud disaster affects the level of herders’ household livelihoods.

While providing food aid at Khaya bagh, Altanshiree soum of Dornogobi province, the herders noted, however, we cannot overcome the natural disasters; it is the worst to lose our livestock because our lives depend on our livestock. Due to harsh winter (temperature -40° C,) and spring storm (4-5 days of a week are stormy in Gobi region) Mongolia’s herders suffers from malnutrition food insecurity thus, food aid with financial support from ECHO  during the emergency was highly appreciated by the herders. At the same time, the food aid is also contributed to help reduce household vulnerability and ensure normal nutrition of households.