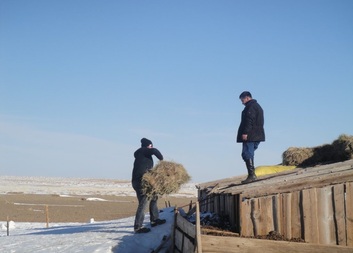 Dzud crisis has affected 12 aimags, which were officially declared to be in the disaster stage, and resulted in the loss of more than 7.2 million livestock, equivalent to 16.4% of the national herd of 44 million livestock in 2010. In a country, where 1/3 of the population is nomadic and livestock is integral component of rural livelihoods, particularly for poor and vulnerable herder households, this huge loss is fatal.

Much of the damage was caused by lack of knowledge about proper disaster preparedness and lack of knowledge about appropriate animal husbandry by untrained young herders. Therefore, CCR provided a set of trainings designed to enhance the capacity of herders for coping with seasonal and climatic variability focusing on herders’ self-preparedness for dzud; and strengthen their skills and knowledge about pasture and livestock management through training on intensive livestock farming and pasture management.

"Improving food security of herders’ population dependent on animal husbandry and living in areas highly susceptible to dzud phenomenon" project, implemented from 2010 to 2011, funded by the European union along with following project partner organizations: Environment and Security Center of Mongolia, National Emergency Management Agency, and Local government in Ovorkhangai (aimag and soum level).

The project was being implemented in Bayan-Ondur soum in Ovorkhangai province. It is one of the worst affected provinces, recording losses over 1.15 million livestock as of 6th April 2010.

The project aimed to improve the food security of vulnerable herder households by establishing community-based fodder and hay storage systems in selected soums, including raising disaster preparedness. In order to reach the objectives of the project, the project had following expected results: